The value of physical objects

I led my first successful release at Rent the Runway today. It was a major revamp of our homepage for a segment of our users. My boss was on vacation and the release happened to fall on his travel day, so it was up to me to help guide the team to push it out.

A bit of background. The storefront of our site is a complex, hairy piece of code that currently controls far too much business logic and is very difficult to test and change. We're working on moving logic out of the storefront into a more service-oriented backend framework model, but it's slow going, and we can't just stop all work while we rewrite everything. So we're trying to make these incremental changes that involve many people, integrating in a complex and difficult-to-test front end. And all the Jira tickets and standups in the world didn't seem to be helping us get a handle on what was happening, who was doing what, and where we were getting stuck and missing our deadlines.

Enter the kanban board. We rolled this out Monday with the help of our product management team. There were fears that people wouldn't like it, that it would be an added piece of process that would bog things down further, that the developers wouldn't bother with it. Today proved all those fear wrong. Within the space of 10 hours, we used the board as a quick glance to see who had which bugs assigned, to see how progress was being made, to quickly reassign work, and to triage the remaining tickets to identify the launch-blockers and promote them.

And when we got it all pushed out, the developers took pictures of the board as evidence of all they managed to accomplish in a day. 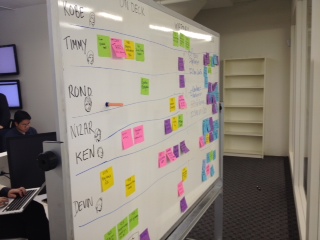 We live in bits and bytes and screens and dashboards and webpages and text files. But sometimes there's no replacement for a physical thing that you can glance at, touch, move around, circle, and stand in front of with a colleague. Never underestimate that.
Posted by Camille Fournier at 7:13 PM